The Tunnelmen Swept at Rocky Point! 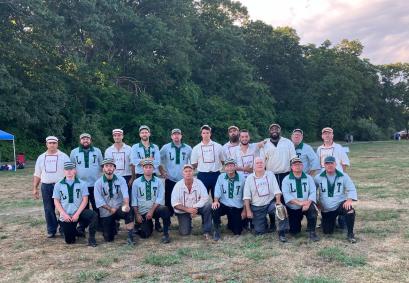 The Tunnelmen enjoyed the fine venue hosted by the Providence Grays at Rocky Point, including many cranks in attendance. The Tunnelmen also welcomed back Firehouse who returned to the diamond after almost a one year hiatus. Unfortunately, the Tunnelmen returned from Rocky Point saddled with two losses. The Tunnelmen arguably had their worst defensive performance in numerous seasons, and were unable to overcome fielding mishaps. In the first match, the Tunnelmen squared off versus the New York Mutuals base ball club losing in a closely contested match by a count of nine to eight, permitting four aces in the bottom of the eighth inning.  The Tunnelmen then faced the Atlantic Base Ball Club of New York and lost by a score of eleven to ten, and permitting five aces in the last two innings of play. The Tunnelmen would like to again thank the Providence Grays and the many fans that arrived to watch base ball!

The Tunnelmen Return from Gettysburg

The Tunnelmen arrived in Gettysburg to visit one of the premiere base ball festivals in America on July the sixteenth and seventeenth and were welcomed by residents and fellow ballists alike. The Tunnelmen began their journey in the Al Reach divison of the Gettysburg vintage base ball tournament and faced the Elizabeth Resolutes in game one on Saturday morning, emerging victorious by a count of ten to eight.  The second match was far less favorable for the Tunnelmen who were soundly defeated by a count of fifteen to four by co-host Gettysburg Generals. The Tunnelmen returned to action in the Consolation bracket of the tournament Sunday morning.  Facing the Flemington Neshanock, Lisbon won convincingly twelve to one and in the final match of the day lost in a seven inning affair to the Talbot Fair Plays by a count of sixteen to fourteen.  The Tunnelmen would like to again thank the Schroeder family for permitting us to play on their grounds, the event co-hosts Elkton Base Ball Club & Exhibition Company and Gettysburg Generals Vintage Base Ball Club, volunteers, and fans that showed their support to our fine game!

The Tunnelmen Take Two from the Grays! 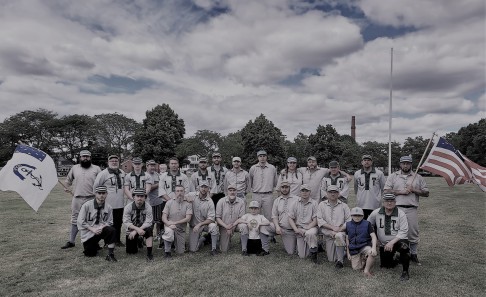 The Tunnelmen arrived in Bristol, Rhode Island to visit the Providence Grays on June the eighteenth and were granted another fine day for base ball, with a generous showing of cranks at the Bristol Town Common. In addition to town activities, the Providence Grays are in the midst of their twenty-fifth anniversary as a ball club and debuted team posters created by local artists to commemorate their accomplishments as a club. The Tunnelmen were less than gracious guests, taking two victories in spirited matches between these well matched clubs.  The first match was played by 1865 rules (no bound outs) and was won by the Tunnelmen by a count of nine to seven. The second match played by 1864 rules (bound outs) was won by Lisbon by a score of nine to three.  Both matches were adjudicated by Rusty Hayes who helped facilitate an enjoyable environment for fine base ball play. The Tunnelmen would like to again thank their brethren from the Providence Grays for their hospitality and the invitation to this fine event. The Tunnelmen will next play on Saturday the sixteenth of July in Gettysburg, Pennsylvania against the Elizabeth Resolutes of New Jersey, in a tournament style event with thirty-two teams to attend.

The Tunnelmen and Atlantic BBC square off!

The Tunnelmen hosted the Atlantic BBC of Brooklyn New York on June the eleventh and was granted a wonderful day for base ball.  The Tunnelmen was victorious in two hotly contested matches between the evenly matched clubs.  The first match was played by 1864 rules (bound outs) and was won by the Tunnelmen by a count of seven to five, in ten innings.  The Tunnelmen tallied two in the ninth inning to tie and two more in the tenth inning for the win. The second match played by 1865 rules (no bound outs) was won in the ninth inning by Lisbon by a score of eleven to ten.  Both matches were witnessed by a small group of cranks who were enjoying recreation and fine base ball play by both teams. The Tunnelmen thank the Atlantic BBC for making the trek to Connecticut, and will travel to New York in approximately six weeks to play the Atlantic BBC at their home in New York.  The Tunnelmen have a quick turnaround as we travel to Bristol, Rhode Island to face the Providence Grays on 18 June.

The Tunnelmen Return from Maine!

The Tunnelmen returned saddled with their first loss of this season as the host Dirigo BBC of Maine defeated Lisbon by a score of ten to four.  The second content was suspended after just three innings with Dirigo ahead five to four, as matches were hosted at the Cumberland Fair, on the infield of the horse rack track. This was the Tunnelmen's first visit to Cumberland and although two matches were not completed, it was a fine venue for a ball game.

The Tunnelmen next host the Atlantic Base Ball Club (Brooklyn Atlantics) on Saturday June eleventh at eleven o'clock in the morning at Fireman's Field, (Fireman's Recreational Area at Salmon River Picnic Area) in East Hampton, Connecticut. 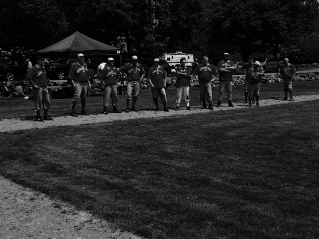 The Tunnelmen returned victorious from a trip to Holliston Massachusetts against the Mudville Nine, by tallies of fifteen to five, and seven to four.  At the plate Sponge recorded eight hits in nine at-bats, with four doubles and five batted in.  Hammy and Barkeep were able to hurl and facilitate mostly quick innings with limited aces against.  This was the Tunnelmen's first visit to Kampersal Field and it was a memorable one.  We would like to again extend our gratitude to the Kampersal family for allowing us to play ball at their fine venue!

The Tunnelmen next travel to Cumberland Maine on June fourth to visit the Dirigo Base Ball Club at twelve o'clock noon at the Cumberland County Fair.  Fans in the Southern Maine area should plan to come take in some base ball action!  More information on the fair can be found at https://www.cumberlandfair.com/ 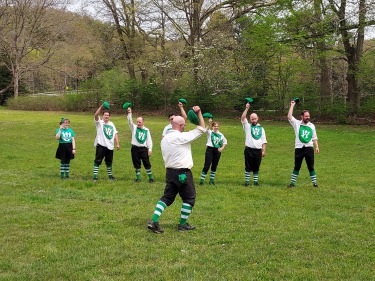 The Tunnelmen started their 2022 season with two victories over the Woodstock Hilltoppers, by tallies of 24-1 and 13-2.  Leading the offensive charge, Guns, Pipes, Sniper and Sponge accounted for 19 hits and 18 runs batted in for the first match.  Halfway tallied 12 hits in 14 plate appearances over both games.

Although the Tunnelmen took both matches, the star of the day was the debut of the Hilltoppers newest prospect, Heartthrob.  In her vintage debut, she recorded both her first hit and first run batted in. It appeared a fine day was had by both teams, with cooperative weather and a small turnout of cranks.

The Tunnelmen next travel to Massachusetts next Saturday 21 MAY to visit the Mudville 9 at 11 o'clock in the morning.  Fans in the Holliston area should plan to come take in some base ball action! 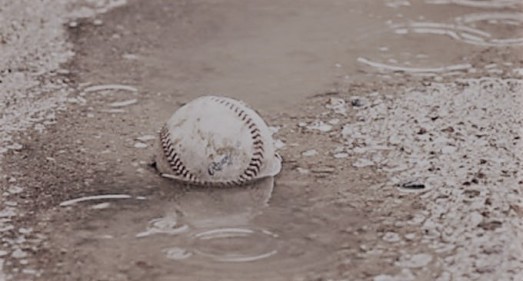 Due to today's weather forecast, the Tunnelmen regret to announce the Connecticut Day has been postponed.  We will look to re-schedule and will share details as they become available.  The Tunnelmen now will start their season next week, 14 MAY vs the Hilltoppers of Woodstock.

4 MAY 22 - With three short days remaining until Connecticut Day, matches will take place starting at 10:30am at Firefighter's Recreation Area at Salmon River Field/Forest.

10 APRIL - Revision 3 of the Tunnelmen schedule has been released.

With 27 short days until the start of the Tunnelmen's 2022 season, we have a major announcement we are thrilled to share!

The Tunnelmen are honored and pleased to announce that for the second consecutive year, we will play host for Connecticut Day. The Fourth Annual Connecticut Day 2022 will feature the Wethersfield Red Onion, Woodstock Hilltoppers, Thames BBC, Ct Bulldogs, Providence Grays & Lisbon Tunnelmen. 1860s style base ball games will commence on MAY 7th at 11:00am and will include Connecticut's & Rhode Island's best vintage base ballers!

24 MARCH - Revision 2 of the Tunnelmen schedule has been released!

The Lisbon Tunnelmen are very pleased to release their 2022 schedule of games.  The Tunnelmen will will make trips to Maine, Massachusetts, Rhode Island, New York and Pennsylvania to meet old and new opponents and to enjoy base ball as it should be played. Please come join us for some historical and spirited play.  Huzzah!

From our homes to yours, the Tunnelmen would like to wish everyone a Happy New Year! 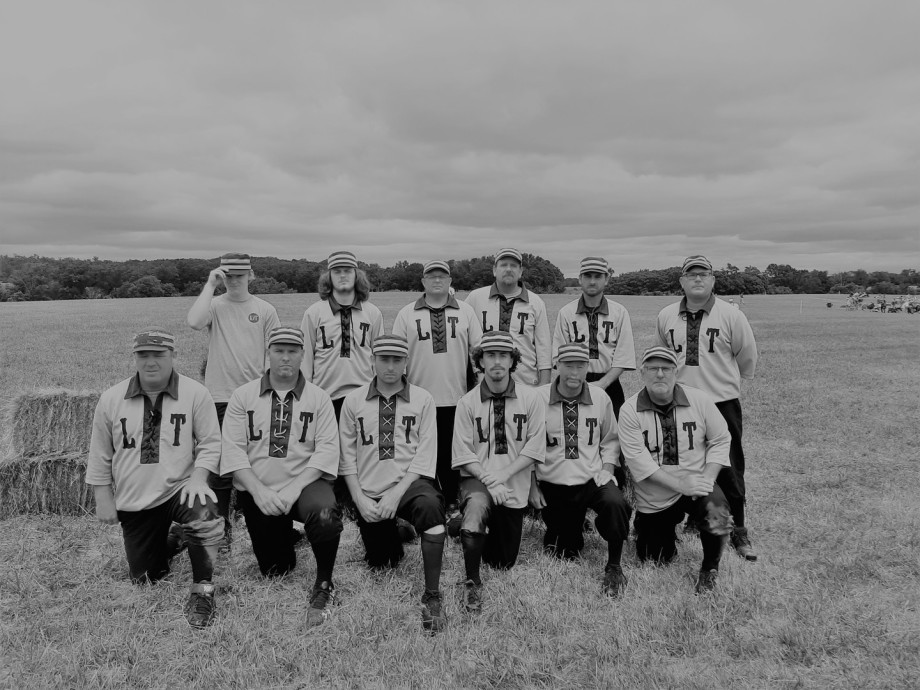 Print | Sitemap
For the Love of The Game!
Login